HCI College continues to monitor the situation with the COVID-19 pandemic. Learn more

A combination of factors are converging to create a shortage of professional nurses, especially in Florida, and an increase in qualified newcomers to the profession is the clear, if not simple, answer.

Over the course of a few decades, the pool of licensed nurses has become unable to meet the demand of the population. As the Baby Boom generation’s mass retirement increases, the aging population requiring greater care increases the demand for nurses. Further, a number of those same retirees are nurses themselves which increases the shortage of qualified health care providers. Many nursing schools are reaching capacity and the rising cost of higher education is becoming more prohibitive to those who desire to enter the field.

“We are doing everything we can to put well-educated nurses into the workforce to take over where the retirees are leaving off. While filling the employment gap, we are mindful of our tuition costs, keeping them affordable for our students,” Brenda Green, HCI’s President and Chief Operating Officer, stated.

The Bureau of Labor Statistics indicates that 1.2 million registered nursing positions would become vacant between 2014 and 2022. With 3 million employed, the American nursing corps is both the greatest segment of healthcare employees and the one in greatest need of incoming candidates. By the year 2025, a 2009 Vanderbilt University research group study estimated that the deficit of nurses will be double that of any shortage since the mid-1960s with the introduction of Medicare/Medicaid.

“Roughly one-third of registered nurses are over the age of 50 and closing in on retirement. More than half that number are expected to vacate their posts in less than a decade. With a younger generation not nearly the same size as the Baby Boomers, and more options for fields of study and careers than in decades past, the up-and-coming nursing corps numbers may simply not be large enough to fill all positions soon to be vacated,” stated Green. 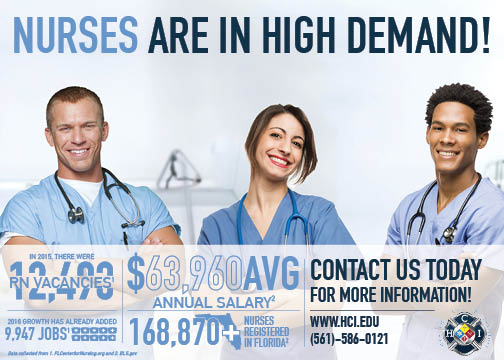 The American Association of Colleges of Nursing reported that, “U.S. nursing schools turned away 79,659 qualified applicants from baccalaureate and graduate nursing programs in 2012 due to insufficient number of faculty, clinical sites, classroom space, clinical preceptors, and budget constraints.” By the year 2030, it’s estimated that 30 U.S. states including Florida will earn an “F” on the Workforce Report Card for nursing job options.

“Higher education and training is a luxury many cannot afford, yet still schools are increasingly unable to accommodate the demand as more students than ever before seek continued education and job training,” stated Green.

“We have created nursing programs that work around students’ already hectic schedules. They are able to come in only one or two days per week while earning their ASN,” Green stated.

As the nation faces a potential nursing crisis, Health Career Institute is one of Florida’s leading providers of training and education for healthcare professionals.

HCI’s goal is to educate future nurses quickly, affordably, and conveniently with accredited programs, flexible schedules, financial support, and quality curriculum designed to graduate well-prepared and highly qualified nursing students, right into the medical settings where they are needed.